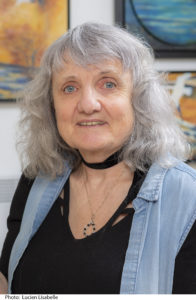 A painter of nature, and above all of trees, Marie Diane Bessette has chosen to live and create in the Laurentians.

She has always had a facility for expressing herself through drawing.

She studied fine arts at CEGEP du Vieux-Montréal where she experimented with various mediums. Subsequently, she continued her artistic training at the Visual Arts Center and at Concordia University, in drawing, oil painting, and later, emotional painting with Rita Briansky.

In 1999, she adopted watercolour as her medium. A nature lover, she studied landscaping and urban forestry. It explains the technical accuracy of the plants in her paintings. She distinguished herself in the municipal field by creating landscapes that are symphonies of form and colour.

Her passion for sailing and arboriculture translates into highly detailed watercolours. Her sense of colour and its effects facilitates the expression of wide open spaces and a diversity of elements in her works, elements she has encountered both in Québec and in her travels around the world. Clouds are often the unifying element that imbues the work with an overall mood that is expressive of the force of nature.

Her evolution toward the semi-figurative occurred when she joined the Sfumato studio in 2012. A prolific artist, her work enables her to explore other recesses of her creativity. She has produced as many small paintings as she has medium and large ones. Many of her works are diptychs and triptychs.